A Giant Boost for All

As one of the hundreds of thousands of people who swarmed the downtown Indianapolis streets the weekend of the Super Bowl, I took as much interest in trying to decipher who specifically benefited from the game's presence in Indianapolis as I did in Trent Dilfer's breakdown of the opposing quarterbacks on ESPN.

Beyond the city itself, which could probably piece together a winning Olympic bid based solely on the positive media clips from the week, I searched for those individual entities whose stock significantly rose during the week or during the game itself. And while compiling a full list would be impossible, here's a short sample of some of the benefactors that caught my attention: 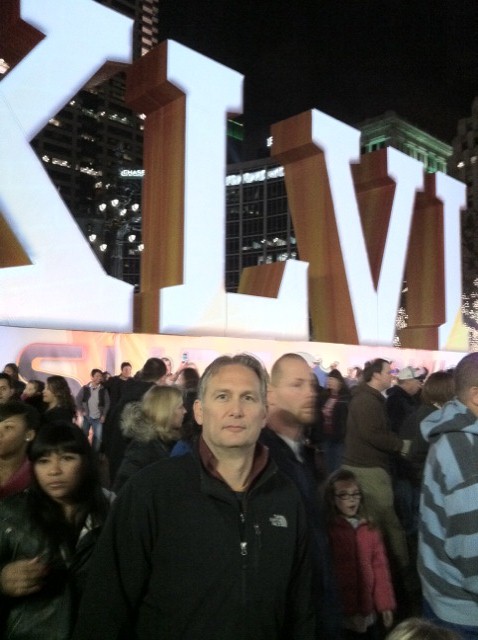 Best Boost for a Dying Brand – the Indy 500 – All this Circle City love has got to help regenerate some interest in the once-famous Indy 500. If Indianapolis can party like that for the Super Bowl, it should be able to leverage that momentum to attract repeat visitors back to the city in May. Plus, the exposure the track received from news programs and talk shows (see Jimmy Fallon's 'Head Swap' video featuring Marco Andretti) during the week gives the race and corresponding series a much-needed publicity boost especially in light of the recent death of one of its stars, Dan Wheldon, and the defection of Danica Patrick to NASCAR.

Best Recipient of Free Publicity – Speaking of Indy car racing, when I worked in the sport in the early 90s, downtown's St. Elmo's Steakhouse was the "it" place to go for drivers and owners. Nearly twenty years later, the iconic restaurant received an unbelievable amount of free publicity through mentions from national media in town for the week who were trying to sound like Indy regulars by consistently name dropping it.

Best Use of Cross Promotion – NBC, who couldn't have milked one more drop of cross promotion out of the Super Bowl. We'll maybe they could have. The Voice's Adam Levine could have executed the ceremonial pre-game coin flip at mid-field – just after fellow judges Blake Shelton's rendition of 'America the Beautiful ' and prior to Cee Lo Green's cameo at halftime with Madonna. However, someone in the control room dropped the ball by cutting to a shot during the game that showed Patriots owner Robert Kraft talking to Boston-native Steven Tyler who, yikes, is a judge on FOX's American Idol.

However, given that an average of 111.3 million total viewers watched the Super Bowl this year –  making it the most viewed television broadcast of all time – NBC will be forever thankful that their turn in the broadcast rights rotation came up this year. 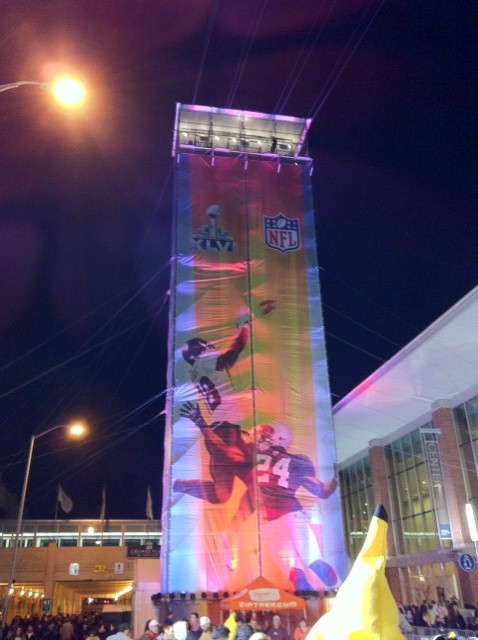 Best Use of Symbolism – Years from now, I'm convinced the 2012 Super Bowl will be known as the "Zip Line Super Bowl" given its constant references in the media and the fact you couldn't talk about going to the Super Bowl Village downtown without someone asking if you were going on the zip line. (Answer: No. I don't mind parting with the $10 but I wasn't into the four-hour wait for a 15-second ride.)

Credit Indy, however, for producing this creative and memorable hook that captivated the media and will be forever synonymous with their hosting of the Super Bowl. It certainly beats Dallas going down in the books as the "Ice Storm Super Bowl" after last year's unseasonable weather in Texas.

Best Transformation of an Old Civic Icon – The lights, music, and video display that was projected onto the giant Roman Numeral 'XLVI' just south of  the Soldiers' and Sailors' Monument on Meridian Street helped breathe new life into a 110-year-old city icon that, years ago, was reflective of a city smugly referred to as Nap Town.

In fact, standing in The Circle during the early evening hours was slightly reminiscent of being in Walt Disney World anticipating the nightly fireworks display. And if I can feel like I'm in Orlando on a February night in Indiana, that's an accomplishment. Like Disney, the area was a melting pot where people of all ages, races and backgrounds congregated to take pictures, view the video display and soak in the festive atmosphere.

As a native Hoosier, I'm proud, but certainly not surprised, that the city knocked it straight through the uprights when on the big stage. But I'm equally impressed by the long shadow of success that it cast upon industry giants such as NBC down to a small Midwestern steakhouse known for its flaming shrimp cocktail sauce.