Can You Really Predict What Will Go Viral?

A week and a half ago, Mashable announced they would be launching a much needed update to their Mashable App for Android. I know you're thinking apps are updating all the time. What's so special about this one and why would I want to actually read about it? Well, I'm with you on that one. And it's a good question. But it's not so much about the actual update as it is about what Mashable claims the updated app can do - predict virality.

A lot of sites, programs and even companies claim they know the formula for virality success. Sadly, there is no one specific formula to make anything go viral. No, there's no magic potion that will create viral content. Not today, anyway. Every audience on every platform for every brand is unique. But is there something out there that can pick up popular content on its way to viral success?

Mashable says yes, and they've named it Velocity. "Velocity scours the social web, collecting lots and lots of data around how people engage with published articles. It then pulls all of that data back to Mashable, dumps it into our own predictive engine, and forecasts which articles are about to go viral."

You can take a look at Velocity in action right within Mashable's website. On the homepage, you'll find a layout with essentially three columns. The first column is titled "The New Stuff", followed by "The Next Big Thing", and finally "What's Hot". The articles and accompanying images are sorted in order of how much attention they're garnering from left to right - with the largest images and article impact on the far right. 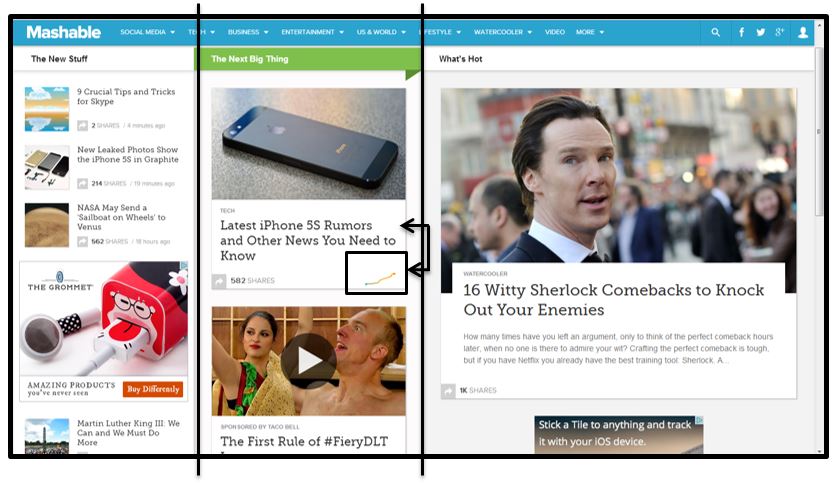 Now, I consider myself a dedicated and loyal Mashable user. I scour the site almost every day. From what I can tell by my personal observations, these viral articles are usually spot on. One of my favorite features is the "Velocity graph" that shows how quickly people are sharing that particular article even though it lacks detail. 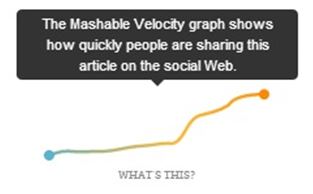 Is it true virality? This leaves me to wonder the age old question of which came first, the chicken or the egg? Are the articles gaining attention because of their content or are these articles gaining popularity because Mashable's telling us these stories are the next big thing or are hot, increasing the likelihood that users click on the content. Also, since one is more likely to click on a larger image, perhaps it's Mashable's use of these larger photos in the right two columns that increase their popularity.

Because of these questions, I believe the jury is still out on its ability to actually "predict" virality. It seems much more likely to be a self-fulfilling prophecy than anything else.