Today is Halloween. So this seems an appropriate time to share our ghoulish views of the all-time scariest episodes in recent marketing history. Some will be familiar. Some maybe not. Some involved brand fatalities. Other brands came back from the dead. 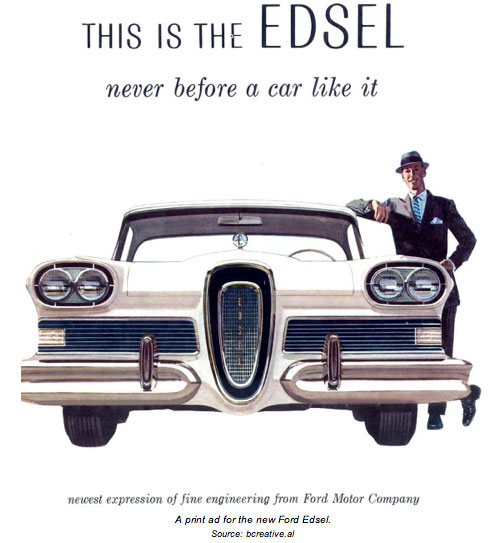 "Never before a car like it" (and never since)

Perhaps you've heard of the Ford Edsel. In 1958, almost everyone in America had. The introduction of the Edsel was one of the most anticipated in history and Ford expected to sell over 200,000 of the new models. Alas, the only thing destined for the Edsel was to become the poster child for failure. It was a big car with big fins when America was looking for less chrome and leaner design. The economy was weak. Expectations were over-promised and quality was under-delivered.  And sales were as shoddy as the workmanship (including a hood ornament that became a dangerous projectile at speeds over 70 mph).

Marketers always need to be sensitive to how their ideas may be seen through the lens of contemporary society. So planting weird looking LED signs along various public transportation points in Boston was probably the wrong idea in the wrong place at the wrong time. But that's what Turner Broadcasting's Cartoon Network did. Sure enough, someone assumed these were bombs and alerted police. Not sure how many people subscribed to the Cartoon Network but it cost Turner Broadcasting $2 million in compensation for the emergency response team and it cost the job of the head of the network.

Was disco really that bad?

Some of you may recall the ill-fated Turkey Promotion on WKRP in Cincinnati. At least that was fiction. Radio station WLUP and the Chicago White Sox pulled the real-life equivalent in 1979 with their "Disco Demolition". The promotional event called for huge crates of disco records to be blown up between games of a doubleheader. Anyone who brought a record was given an admission ticket for just 98 cents. Some 90,000 "disco-tents" showed up, a bit less than twice the capacity of the stadium. Records became potentially lethal Frisbees. And a small riot ensued.

You've heard of the Chia Pet and other Chia infomercial products. Did you know there was once a Chia version of President Obama? Apparently Chia's founder told CNN he didn't understand what all the criticism was about. Maybe someone should tell him.

Until being recently upstaged by Apple and Google, Coca-Cola was long considered America's most valuable brand. But sometimes even iconic brands don't read the brandscape properly. Like when Coke decided it would de-fizz rival Pepsi-Cola's Pepsi Challenge campaign by introducing a new sweeter formulation of the "classic" Coke recipe. That idea didn't work out too well either. In 79 days, Coke responded to the outcry of loyal Coke customers and switched back to its original formula. I'm guessing Coke won't make that mistake again.

Imagine if some of these situations had occurred in these days of social media? The impact would have been instantaneous. Indeed, there have already been numerous examples of marketers trying to leverage their brands through ill-advised or inappropriate tweets and posts during serious news events. But we'll save those stories for next Halloween.

Until then, marketers...be afraid, be very afraid.