Risk in Advertising: When Does it Pay to Take Creative Risks?

Traditional advertising has become increasingly difficult. Consumers are more empowered to ignore, skip or remove advertising than ever before. Because of this, some companies are taking risks, both in their messaging and in their marketing channels.

If you haven't seen the video, watch it now.

The ad is undeniably well-produced and artistically beautiful, but has been controversial, because of its dark tone, its exaggerated, negative caricature of the food industry, and its thinly-veiled promotional motive.

Creative & Artistic Risks
When it comes to the tone and similar artistic choices, the most universally safe ideas run a serious risk of being forgettable. On the other hand, every time you do something bold and unique you're taking a different risk: you're alienating a group of people who don't appreciate that particular style in order to dramatically increase the impact for those who do. Practically speaking, that gamble pays off when the impact on the second group is more valuable than the hit from the first group. As a general rule, it's important to consider your overall brand strategy and make sure your communications serve that strategy.

Risks of Exaggeration and Caricature
Much of the impact of the Scarecrow ad comes from the frightful way that it portrays the food industry. While this strategy can effectively differentiate your brand, there's also a major risk that it could backfire. If customers decide that you've taken too much artistic license, they may stop trusting your brand. Surprisingly, this often isn't judged based on whether your claims are literally true, as much as whether they resonate emotionally. Chipotle was tapping into our widespread cultural distaste for unethical farming techniques, so we quickly overlooked the obvious exaggeration. After seeing that commercial, I went to the Chipotle website just to see whether their practices were substantially different than a typical restaurant. It turns out that they actually have a lot to say on the matter. For me personally, their strategy worked well. I learned that Chipotle emphasizes environmental integrity--something I didn't know before. A less dramatic commercial wouldn't have motivated me to research the issue further. 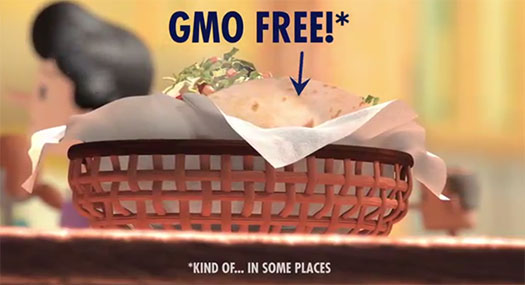 The Risk of Pretending You're Not Advertising
Chipotle's leadership has been very critical of traditional advertising. While I certainly sympathize with this perspective, I think companies go too far when they pretend their customers are too dumb to realize that they're watching a promotional message. Chipotle was called out for this on the popular video website Funny or Die, which I encourage you to watch here.

The problem with trying to disguise advertising is that most people can see right through it. Again, if you're too blatant about this, consumer confidence in your brand integrity will take a hit. In this case, I don't have a problem with Chipotle's video. It's pretty clear that it's promotional—they're just promoting one of their brand values, rather than the brand's products. Completely legit.

However, don't be fooled into thinking that this isn't advertising. It is advertising. The only thing that changed is that they distributed it primarily online instead of on television. Your audience is smart enough to recognize that fact.

Big risks often come with big rewards. In this case, Chipotle's Scarecrow video has over seven million views on YouTube alone. That doesn't even count the number of mentions that it received in traditional and social media. It also led to something like a 15 percent bump in search volume and contributed to a 15 percent increase in overall profit for the brand. By almost any standard, that's a major success.