The Scariest Case of Tourism Marketing. Ever.

Everyone has heard of Alcatraz and can easily conjure a mental picture of the famous island in the San Francisco Bay. An incredibly popular tourist destination with over a million visitors a year, it’s not a tough sell to convince vacationers to add Alcatraz to their list of destinations. But what if you want to promote an abandoned prison that is not a national landmark? You get creative – and that’s exactly what the promotions team behind Eastern State Penitentiary in Philadelphia has done. 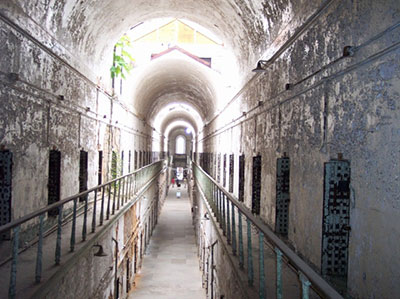 Built in 1829, Eastern State housed inmates for 142 years. By comparison, Alcatraz was only in operation as a Federal prison for 29 years. Structurally unsound due to age, Eastern State Penitentiary closed in 1971 and did not open for its first season of regularly guided tours until 1994, coincidentally just a year after Alcatraz opened to the public. Now, did this lead to a head-to-head, coast-to-coast marketing war to capture the interests of vacationers everywhere? Nothing so dramatic. However, with such a unique product to market - a prison as tourist destination - opening dates so close, and the ability of both entities to claim the same most famous inmate, Al Capone, I find the comparison very interesting. Charged with attracting visitors to a basically unknown destination, Eastern State created dramatic and sometimes unexpected experiences to lock down its place on the tourism map. Some of the current efforts illustrate this approach.

Eastern State’s annual Terror Behind the Walls (happening right now) is a six-week event that features a cast of hundreds, animatronics and movie-style sets. What began as an idea for a single night of fundraising over 20 years ago is now ranked by the Travel Channel as one of America’s scariest Halloween attractions. Promoted by its own dedicated website and Twitter feed, as well as an obviously strong PR effort based on article hits, Eastern State has created a landmark event. 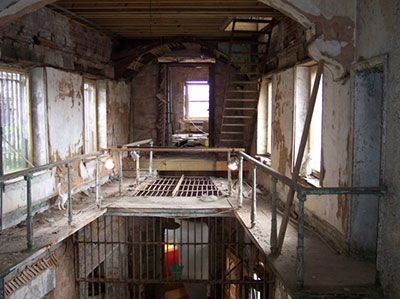 While the Halloween tie-in to a gothic and reportedly haunted structure may be obvious, many of Eastern State’s other events are more unexpected. At any given time of the year, a physical tour of the facility is enhanced by secondary attractions such as temporary art installations, discussion series, and Pets in Prison family weekends. Taking advantage of its dramatic architecture, Eastern State hosts photographers’ twilight tours and holds visitor photo contests. All of these are, wisely, supported by a strong social media presence. Beyond spreading the word about events, social media posts share fascinating historical notes from the warden’s log about things such as inmate activity and specific legal charges that are humorous to read in today’s context.

Securing the position of America’s Most Historic Prison and offering a unique experience, Eastern State has been successful in making a name for itself that is distinct from that “Rock” on the other side of the country.