We call it the year of the bride here at Villing & Company. Four twenty-something staffers entered into the world of wedded bliss in 2007. Imagine what Jeannine and Thom Villing thought — FOUR WEDDINGS and FOUR HONEYMOONS! But now the year has come to a close, the weddings are behind us, and there are four very happy women here at Villing.

Bride 1: Lesley Langfeldt, Account Executive
Lesley married Tod Langfeldt in April in Plymouth, Indiana. Despite a little snow…yes SNOW…in April, the wedding was beautiful and went off without a hitch. 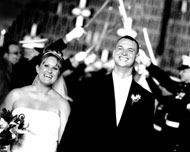 Bride 2: Sara Beckwith, Media Director
Sara married Michael Beckwith in South Bend in late September. Michael, a Marine, returned from serving our country in Iraq earlier this year. The couple was thrilled to be reunited and even more excited to officially tie the knot.

Bride 3: Sasha Skow, PR Account Executive
On November 2nd, Sasha married Bobby Lindsey in their hometown of Toledo, Ohio. Sasha’s dad, who is a judge, married the couple. This wedding was a PARTY — rumor has it they stayed and danced until 2a.m.! 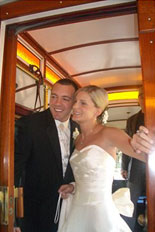 Bride 4: Abby Szklarek, PR Account Executive
Just a day later, on November 3rd, Abby married Jeff Szklarek in her hometown of Geneva, IL (outside Chicago). Despite a grim forecast, the weather turned out to be perfect, and Abby says it was the best day of her life!